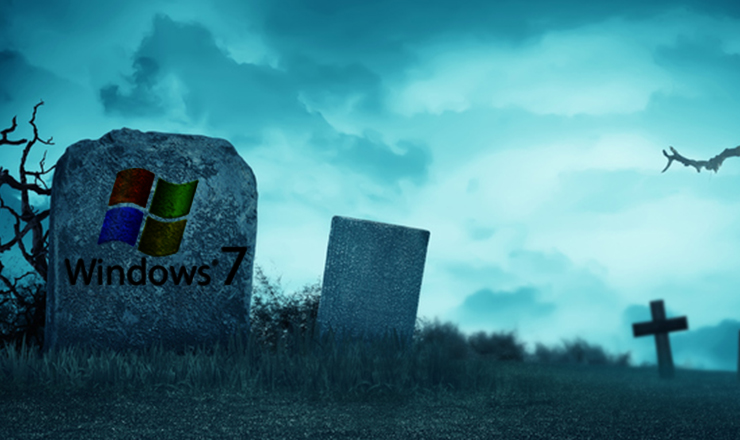 When Microsoft launches a new version of Windows, it kicks off End of Life processes for the previous version. This creates a cascading affect: users adjusting to the new updates while preparing for dwindling support on their older versions. For example, when Microsoft launched Windows 10 on July 29, 2015, it ended Mainstream Support for Windows 7 on January 13, 2015, and began offering only their Extended Support. So heads up: As Windows 7 nears end of life, Extended Support for Windows 7 will expire after January 14, 2020.

One caveat: only computers that had installed Service Pack 1 were eligible for Extended Support.

According to NetMarketShare’s January 2018 data, 42% of Microsoft’s customers who purchased Windows 7 are still using it. Meanwhile, only 34% of the people who used Windows 7 have upgraded to the most recent operating system, Windows 10.

Windows 7 lovers say they’re loyal because the operating system was the perfect blend of old-school Windows feel, enhanced with cutting-edge technology. But, it’s time has definitely come..and gone. So how can you prepare for Windows 7 end of life?

Customers who upgraded to Windows 8.1 are facing End of Life issues as well. Microsoft stopped providing Mainstream Support on January 9, 2018 and Extended Support ends on January 10, 2023.

To make this a little more complex, computers that contain newer chipsets from AMD and Intel must run Windows 10. These chipsets will not be able to function with Windows 7, so downgrading to Windows 7 or 8.1 is not an option. Computer components have seen major changes since Windows 7 was released on July 22, 2009. Windows 7 also lacks the device drivers required for many basic functions such as WIFI, graphics and audio to name a few.

Since the end of October 2016, all new PCs have been sold with Windows 10. Businesses that want to run those PCs on the older versions of Windows will now need to rely on downgrade or software assurance rights. The other side of the coin is that Windows 10 will run slowly –or maybe not at all — on older laptops. Windows 10 was designed for newer computers that have more robust processors and a lot more memory. This would be especially apparent when running the most recent versions of web browsers or accessing videos and music online.

When Does Extended Support for Windows 7 End?

Microsoft no longer adds new features to the software and will no longer release new service packs under Extended Support. It will continue to patch any security threats and provide hotfixes (a hotfix is software code that fixes a bug in the product) until January 14, 2020. However, only the most critical security updates will be provided.

We also need to address the End of Life for Windows Embedded POSReady 7, which is Microsoft’s operating system designed for Point of Service solutions (Point of Sale devices). Many POS devices use an even older operating system – POSReady 2009. Both versions are currently in the Extended Support phase.

Windows 10 IoT Enterprise and Mobile Enterprise both have some minimum hardware requirements for memory and processors, which are necessary for the hardware to function properly with the new version of Windows. Point of Sale devices that do not meet the minimum hardware requirements will need to be replaced. Companies that do not replace those devices, will unfortunately, have a much higher risk of a data breach once they are no longer receiving security updates.

How to Plan for Windows 7 End Of Life

There’s still time (a little less than two years to be exact) to plan and prepare your company for Windows 7 EOL. It will take careful planning to minimize disruption to daily operations as businesses rollout upgrades or new computers and devices. This will be especially critical for retailers who will need to plan upgrades and deployments around their busiest times of the year.

For Point of Sale devices, Extended Support is still available for the next three and a half years. It’s not time to hit the panic button yet, but companies should begin reviewing their computers, Point of Sale devices and potential options so that they make the best possible decisions.

Looking ahead: No Windows 11, Only Windows 12

Microsoft will periodically update Windows 10 with new features, plans to skip Windows 11 and has Windows 12 set for early 2019 release.