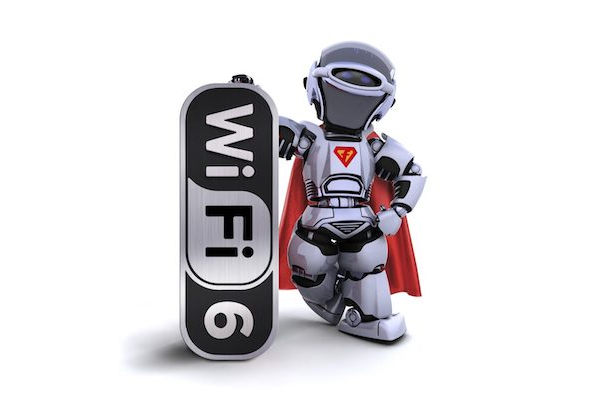 NextGen Wi-Fi is here, and this time it’s not just about speed; it’s about speed for all. If you’ve ever sat on a packed rush hour train and fought for a glimmer of connection among the sea of mobile phones, tablets, and laptops of your fellow commuters – Wi-Fi 6 is for you.

In addition to making public transportation more productive (unless of course, you’re just skimming through Instagram), NextGen Wi-Fi will also provide relief to organizations by boosting connectivity and speed across enterprise-level networks.

Here’s a look at how the latest upgrade in wireless technology will impact your enterprise network and its users.

Wi-Fi 6, or the IEEE standard 802.11ax, replaces 802.11ac (Wi-Fi 5). It has a multitude of advantages over the previous generation. The Wi-Fi Alliance released the new standard in October of 2018, and acknowledged that along with the better performance, Wi-Fi naming conventions were also getting a user-friendly upgrade:

“For nearly two decades, Wi-Fi users have had to sort through technical naming conventions to determine if their devices support the latest Wi-Fi,” said Edgar Figueroa, president and CEO of Wi-Fi Alliance. “Wi-Fi Alliance is excited to introduce Wi-Fi 6, and present a new naming scheme to help industry and Wi-Fi users easily understand the Wi-Fi generation supported by their device or connection.”

From here on out, we’ll refer 802.11ax as Wi-Fi 6. In addition to the nifty new name, it promises higher speeds, increased throughput, and better user experiences.

It also provides ample opportunities for improvement for new construction projects or for upgrading existing enterprise IT infrastructure.

By design, Wi-Fi 6 has an overall higher throughput than has been available with any previous wireless technology. While Wi-Fi 5 averaged 1.3gbps, Wi-Fi 6 would have on average 3.5gbps, to a theoretical maximum of 14gbps. It is estimated to be 30% faster than its predecessor.

It splits up its speed across multiple devices, delivering a higher speed to many users at one time. So while a single device may not notice the difference between the speed of a Wi-Fi 5 vs. a Wi-Fi 6 connection, the game changes for overloaded networks traditionally bogged down by high traffic and many users.

This has the biggest impact on condensed environments with multiple users such as stadiums, airports, and trains –which have always hindered traditional Wi-Fi connections. Wi-Fi 6 delivers four simultaneous streams to an individual user. This means that offices with dense IoT and multiple simultaneous hi-resolution video conferences are finally free from annoying lag time (hooray! more conference calls!).

It also has the added ability to provide cellular offloading. This means sharing the load of the cellular network, especially in high-density user areas. This would have advantages in large venues, such as stadiums, arenas, and large public events where a multitude of cellphone users would not experience the usual bogged-down speed that normally comes with being amongst many other users. The Wi-Fi itself acts as leverage, taking some of the load off traditional cell signals.

Our partners at Cisco have already released Wi-Fi 6 compatible routers (as have other manufacturers such as Aruba, Aerohive, Extreme Networks, Zebra Technologies, and Fortinet) You can get on Wi-Fi 6 with your current peripherals and devices by installing one of these new routers.

Along with upgrades for speed and bandwidth, the new standard is flanked by a security protocol: WPA3. Released in June 2018, WPA3 provides superior security over WPA2, including four new features. Most notably, it uses a Simultaneous Authentication of Equals (SAE) handshake, (replacing WPA2’s Pre-Shared Key (PSK) exchange protocol).

Although not technology is impervious to vulnerabilities, security experts are excited about WPA3 and how it will protect advanced networks like the ones that will run on Wi-Fi 6.

Here are three things you need to do right now to prepare your enterprise network for an upgrade:

1. Perform a device audit to determine where you stand, in terms of speed and coverage.

2. Consult with your favored deployment company. They can help with questions, configuration, and arrangement.

3. Plan for the long term, for your company, and infrastructure. Wi-Fi 6 will be a game-changer for all your connected devices.

Good news: you don’t have to toss your existing devices and peripherals because Wi-Fi 6 is backward-compatible. Unlike Wi-Fi 5, which only supports 5ghz, Wi-Fi 6 supports both 2.4ghz and 5ghz. You can bet the next generation of smartphones, laptops and smart home devices will be built for Wi-Fi 6 use.

Whether you’re an IT administrator with an existing network wishing for a modern infrastructure upgrade, or a bleeding-edge organization with the most modern wireless technology, we can help.

Contact us to learn more about our advanced network design capabilities and enterprise network solutions that keep your business running.